NHL rumors earlier this season had mentioned that the New Jersey Devils were looking to complete a P.K. Subban trade.

GM Tom Fitzgerald has now come out and let teams know the Subban is available for a trade and hopes to complete a deal by the NHL trade deadline.

Pierre LeBrun reports on The Athletic that Fitzgerald sat down with P.K. Subban and talked about uncertainty and the trade deadline and that the Devils were not at a spot where they are looking to extend him at this point.

LeBrun went on to say, a trade for Subban has to make sense for the team and the player, too. The Devils would also need to eat some of Subban’s $9-million cap hit to make any deal work.

There is no word on what teams are interested in a Subban trade but the Devils hope to bring back some assets if they eat half of Subban’s cap hit. 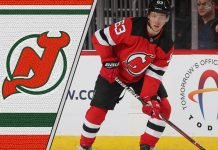