1974: Bobby Clarke has six points, including his second NHL hat trick, Ross Lonsberry scores three goals and Simon Nolet has a goal and four assists in the Philadelphia Flyers’ 12-2 win against Detroit at the Spectrum. It’s the first double hat trick in Flyers’ history.

1977: Ian Turnbull of the Toronto Maple Leafs sets an NHL record for defensemen by scoring five goals in a 9-1 victory against the Detroit Red Wings at Maple Leaf Gardens.

“It was one of those nights where things happened to click,” Turnbull says after scoring two goals in the second period and three in the third.

Four decades later, he is still the only defenseman in NHL history to score five goals in a game.

1980: Phil Esposito of the New York Rangers becomes the second player in NHL history to score 700 goals when he gets Nos. 699 and 700 in the Rangers’ 6-3 victory against the Washington Capitals in Landover, Maryland. He scores No. 699 with a second-period goal, then joins Gordie Howe in the NHL’s 700-goal club early in the third period by taking a pass from Don Maloney and beating Wayne Stephenson with a wrist shot.

1989: The Pittsburgh Penguins end a 42-game winless streak at the Spectrum by defeating the Flyers 5-3. It’s Pittsburgh’s first win in Philadelphia since Jan. 20, 1974; the Penguins lose 39 games and tie three between wins at the Spectrum.

2017: Patrick Marleau of the San Jose Sharks becomes the 45th player in NHL history to score 500 goals. The milestone comes when he scores 9:30 into the first period of the San Jose Sharks’ 4-1 win against the Vancouver Canucks at Rogers Arena. All 500 goals come with the Sharks after he’s taken with the No. 2 pick in the 1997 NHL Draft. 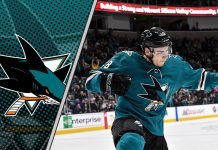