1923: The first NHL game is broadcast on radio when CFCA airs the third period of a game between the Toronto St. Patricks and the Ottawa Senators from Arena Gardens in Toronto.

1934: A standing-room-only crowd jams Maple Leaf Gardens to see the defending Stanley Cup champion Toronto Maple Leafs defeat a team of NHL all-stars 7-3. The game is played to benefit former Maple Leafs player Ace Bailey, whose career is ended prematurely when his skull is fractured earlier in the season from a hit by Eddie Shore of the Boston Bruins.

Busher Jackson scores twice for the Maple Leafs in front of a crowd of 14,074, though the highlight of the night comes before the opening face-off when Shore approaches Bailey, who extends his hand. The game generates almost $21,000, which is given to Bailey, who remains with the Maple Leafs for decades after and is inducted into the Hockey Hall of Fame in 1975.

Owner Conn Smythe announces that Bailey’s No. 6 will not be worn again; it’s the first number in NHL history to be retired.

1954: Gordie Howe scores two goals and has an assist, including his 500th NHL point, in the Detroit Red Wings’ 5-0 road win against the Chicago Blackhawks. It comes in Howe’s 492nd regular-season game. Terry Sawchuk earns his 43rd NHL shutout.

1977: Al Hill of the Philadelphia Flyers scores on his first two shots and has an assist in each period for a five-point night, tying the NHL record for most points by a player in his first game. Hill’s big game helps the Flyers hold off the St. Louis Blues 6-4 at the Spectrum.

1986: Wayne Gretzky has the third (and final) seven-assist game of his NHL career, helping the Edmonton Oilers defeat the Quebec Nordiques 8-2 at Northlands Coliseum. The seven assists match the League record first set by Billy Taylor of the Red Wings in 1947.

1988: Marcel Dionne passes Phil Esposito to move into second place on the NHL all-time goal-scoring list when he scores two power-play goals for the New York Rangers in a 4-4 tie with the New York Islanders at Madison Square Garden. Dionne’s two goals give him 719 for his NHL career, two more than Esposito.

1990: Mario Lemieux‘s scoring streak ends at 46 games, five short of Gretzky’s NHL record, in the Pittsburgh Penguins’ 4-3 win against the Rangers at Madison Square Garden. Lemieux, who’s hampered by a back injury, plays little in the first two periods and sits out the third, finishing without a point.

1993: The San Jose Sharks defeat the Winnipeg Jets 3-2 at Winnipeg Arena to end their 17-game losing streak, leaving them tied with the 1974-75 Washington Capitals for the longest in NHL history. Kelly Kisio scores two goals and has an assist for the Sharks, who also end a 20-game winless streak (0-19-1).

2003: Boston’s Mike Knuble sets an NHL record for fastest two goals from the start of a game by one player. Knuble scores 10 seconds into the game against the Florida Panthers, then makes it 2-0 17 seconds later. The Bruins fail to hold the early lead but win 6-5 in overtime.

2004: Sergei Fedorov becomes the first Russian-born player in NHL history to score 1,000 points. He does it by getting two assists for the visiting Mighty Ducks of Anaheim in a 2-1 victory against the Vancouver Canucks.

2009: Mike Green of the Washington Capitals sets an NHL record for defensemen by scoring a goal in his eighth straight game, a 5-1 road win against the Tampa Bay Lightning. He passes Mike O’Connell of the Bruins, who scores in seven straight games during the 1983-84 season, when he beats Karri Ramo for a power-play goal 5:33 into the second period. 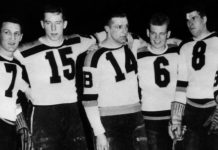 November 20: This Day in NHL History 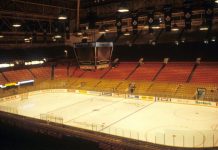 November 12: This Day in NHL History 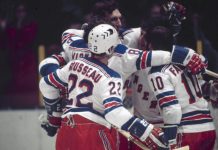