1920: Goaltender Chuck Rayner, a member of the Hockey Hall of Fame who nearly leads the undermanned New York Rangers to the Stanley Cup in 1950, is born in Sutherland, Saskatchewan.

Rayner, nicknamed “Bonnie Prince Charlie,” signs as a free agent with the New York Americans and makes his NHL debut as a 20-year-old in 1940-41, going 2-7-3. He plays one more season with the Americans before the team folds. After three years in the Royal Canadian Navy, he signs as a free agent with the Rangers and joins them for the 1945-46 season. His best season comes in 1949-50, when he goes 28-30-11, wins the Hart Trophy as most valuable player and helps the Rangers finish fourth and qualify for the Stanley Cup Playoffs.

Rayner limits the Montreal Canadiens to seven goals during New York’s five-game upset victory in the Semifinals. Though New York has no home games in the Final against the first-place Detroit Red Wings because the circus has priority at Madison Square Garden, his goaltending helps them get to Game 7 before they lose on a goal by Pete Babando in the second overtime.

A knee injury costs Rayner the starting job in 1952-53, which turns out to be his last NHL season. He is voted into the Hall in 1973 despite a career record of 138-208-77 and never finishing with a winning record.

1989: Gord Stellick resigns as general manager of the Toronto Maple Leafs after they finish last in his one season on the job. Stellick, a member of the organization since age 17, becomes the youngest GM in NHL history at the time when he’s hired in April 1988 at age 30.

2008: The Los Angeles Kings agree to a contract with defenseman Drew Doughty, the second player taken in the 2008 NHL Draft. Doughty leads all NHL rookies with an average ice time of 23:49 in 2008-09, finishing with six goals and 27 points. He becomes one of the NHL’s best defensemen, is instrumental in the Kings’ Stanley Cup championships in 2012 and 2014 and wins the Norris Trophy in 2016. 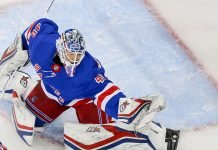 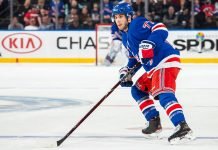