The Montreal Canadiens will have some big decisions to make this offseason.

At the top of the list will be whether to sign soon-to-be RFA defenceman P.K. Subban to a long term deal. Rumors are Subban’s agent will be asking for a 8-year term at $8.5 million/year.

Other decions for GM Marc Bergevin will be in the UFA department. Do they re-sign veterans Brian Gionta, Andrei Markov and Mike Weaver? Will the Habs offer the under-performing Thomas Vanek a long-term contract?

It will be a very busy offseason for the Habs. 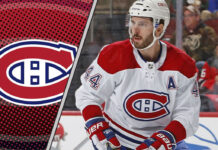