THIS DATE IN NHL HISTORY: May 3

1968: The St. Louis Blues become the first expansion team to qualify for the Stanley Cup Final. Ron Schock’s goal at 2:50 of double overtime gives the Blues a 2-1 victory against the Minnesota North Stars in Game 7 of the Semifinals at St. Louis Arena and a berth in the Final against the Montreal Canadiens. The Blues emerge from the West Division, which houses the six teams added for the 1967-68 season; they lose four one-goal games to the East Division-champion Canadiens in the Final.

1973: Henri Richard sets the NHL record for most career games played in the Stanley Cup Playoffs when he steps onto the ice for the Canadiens in Game 3 of the Final at Chicago Stadium. It’s Richard’s 165th postseason game, one more than Red Kelly, the previous record-holder. Richard goes without a point in the Black Hawks’ 7-4 win.

1983: Mike Bossy scores three goals to power the New York Islanders to an 8-3 win against the Boston Bruins at Nassau Coliseum in Game 4 of the Wales Conference Final. Bossy scores the go-ahead goal early in the second period, then gets two more in New York’s five-goal blitz during the first 9:52 of the third period. Rick Middleton scores a power-play goal in the third period to become the first Boston player with 30 points in one playoff year.

1991: Vladimir Ruzicka has four assists in regulation, then scores at 8:14 of overtime to give the Boston Bruins a 5-4 win against the visiting Pittsburgh Penguins in Game 2 of the Wales Conference Final. Ruzicka’s first assist comes on Cam Neely’s power-play goal 5:23 into the game; it’s Neely’s 47th playoff goal with the Bruins, moving him past Phil Esposito for the most by a Boston player. The victory gives the Bruins a 2-0 lead in the best-of-7 series.

1995: Penguins forward Jaromir Jagr has an assist in a 4-3 season-ending loss to the Florida Panthers to become the first European-born and -trained player to lead the NHL in scoring. Jagr and Eric Lindros of the Philadelphia Flyers finish the 48-game season with 70 points, but Jagr is awarded the Art Ross Trophy because he scores 32 goals, three more than Lindros. It’s the first of five scoring titles for Jagr in a span of seven seasons.

Gelinas becomes an overtime hero for the third time when he scores at 19:13 of OT to give the Flames a 1-0 win against the visiting Detroit Red Wings in Game 6 of the Western Conference Semifinals.

The goal comes after Gelinas eliminates the Vancouver Canucks by scoring in overtime of Game 7 in the conference quarterfinals. His only other previous Stanley Cup Playoff goal in overtime is a game-winner for the Carolina Hurricanes against the Toronto Maple Leafs in 2002.

The Flames move into the Western Conference Final in their first trip to the playoffs in eight years.

2009: Todd Marchant’s goal 1:15 into triple overtime gives the Anaheim Ducks a 4-3 win against the Detroit Red Wings at Joe Louis Arena in Game 2 of the Western Conference Semifinals. Marchant scores his second career overtime playoff goal but the first since April 30, 1997, when he scores with the Edmonton Oilers to eliminate the Dallas Stars. It’s the third-longest gap between playoff overtime goals in NHL history.

2014: The Freeway Faceoff comes to the postseason for the first time when the Los Angeles Kings defeat the Ducks 3-2 in overtime at Honda Center in Game 1 of the Western Conference Second Round; it’s the first playoff game since the Southern California rivals begin playing each other in 1993. Kings forward Marian Gaborik ties the game with 7.0 seconds remaining in the third period, then gets the winner at 12:17 of overtime. His heroics spoil the night for the Ducks and forward Teemu Selanne, whose third-period goal would have been the game-winner. Selanne, 43, becomes the third-oldest player in NHL history to score a playoff goal, behind Gordie Howe (52) and Chris Chelios (45). 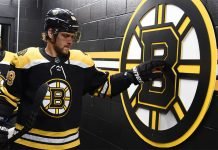 Boston Bruins looking to trade for a left-side defenceman 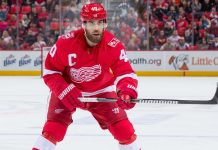 Does Henrik Zetterberg belong in the Hockey Hall of Fame 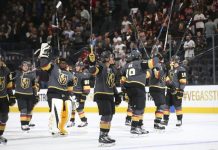